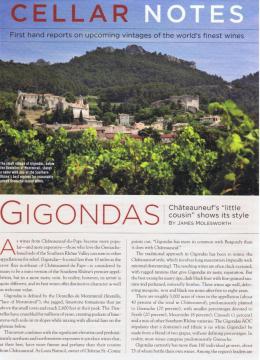 As wines from Châteauneuf-du-Pape become more popular – and more expensive – those who love the Grenache-based reds of the Southern Rhône Valley can turn to other appellations for relief. Gigondas […] is considered by many to be a mini version of the Southern Rhône’s premier appellation, but in a more rustic vein. In reality, however, its terroir is quite different, and its best wines offer distinctive character as well as welcome value. […] This terroir combines with the significant elevation and predominantly northern and northwestern exposures to produce wines that, at their best, have more finesse and perfume than their cousins from Châteauneuf. […] The traditional approach in Gigondas has been to mimic the Châteauneuf style, which involves long maceration (typically with minimal destemming). The resulting wines are often thick-textured, with rugged tannins that give Gigondas its rustic reputation. But the best examples marry ripe, dark black fruit with fine-grained tannins and perfumed, minerally finishes. These wines age well, delivering mesquite, iron and black tea notes after five to eight years. […] Gigondas currently has more than 180 individual growers, […] Among the region’s leaders are producers such as Domaine Les Pallières, Domaine Santa Duc, Château de Trignon, Domaine des Espiers and Perrin et Fils, among others.