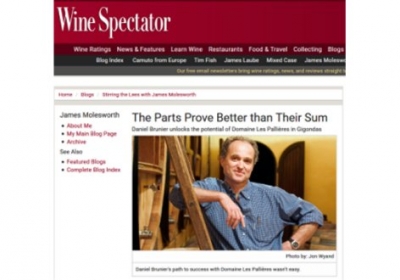 THE PARTS PROVE BETTER THAN THEIR SUM

In the late 1990s, Daniel Brunier was expanding his family’s holdings. Along with his brother Frédéric, Daniel had Domaine du Vieux Télégraphe, the family’s flagship property in Châteauneuf-du-Pape, humming along. Vineyards in the Ventoux had been acquired for additional bottlings and he had set up his Massaya venture in Lebanon.

But one day Brunier got a call to come visit Domaine Les Pallières, a Gigondas estate with 60 acres of vines, and a big problem: It wasn’t selling any wine. In the cellar, still in foudres and vats, were five vintages’ worth of wine, from 1993 through 1997. The 1998 harvest was hanging on the vine, and there was literally nowhere to put it.

The estate can be divided into two portions, upper and lower. The upper terraces are over 1,000 feet in elevation, average about 45 years of age and are planted primarily to Grenache with some Mourvèdre. The parcels around the winery itself range from 650 to 800 feet, and the Grenache, along with a mix of Cinsault and Syrah, are markedly older, at 70 years and up. Brunier vinified these two portions separately, then eventually blended them to make a single estate cuvée. But he kept finding the tannins a bit tight, even « rude, » as he puts it.